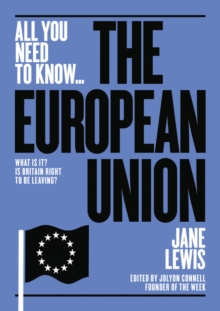 The European Union : what is it? is britain right to be leaving it?

History is littered with failed attempts to unite Europe by force, from the Roman Empire and the Byzantine Empire onwards.

By contrast, the European Union began as a small and unglamorous attempt to unite the continent after the terrible devastation wrought by the Nazis - in the hope that it would prevent any further terrible wars. Driven by a handful of mainly French economists and diplomats, men like Jean Monnet, it started out as the modest, very pedestrian-sounding European Coal and Steel Community.

Now it is a monolith with its own currency, comprising 28 nations and a total population of more than 500 million people, and its tentacles extend into all our lives - arguably, its decisions are more important than those of any single national government.

In this clear and compelling short book, Jane Lewis tells the story of the European Union, from its modest beginnings to its huge bureaucratic present. And she asks: has it gone wrong? Is it now really what the founding fathers dreamt of?

Is Britain right to be leaving it and how will Brexit affect the EU?

Can it survive? Or is it headed irresistibly towards collapse?