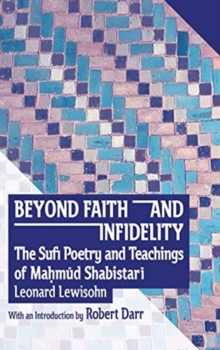 Beyond Faith and Infidelity : The Sufi Poetry and Teachings of Ma?mUd ShabistarI

Shabistari’s poetry frequently offers a deconstruction of the literalists’ views concerning faith and infidelity. Essential to his understanding of Sufism is the need for personally experiencing the liberated state of the ‘heart’ that lies beyond so-called faith and infidelity. Professor Leonard Lewisohn has, not surprisingly, named his masterful study of Shabistari’s teachings, Beyond Faith and Infidelity.

Professor Lewisohn presents us with a comprehensive study of the historical context and the cultural and literary environment of Shabistari’s era. In addition to the more audacious hermeneutical teachings of Sufism like the one explored above, the Garden of Mystery summarizes the Islamic/Hellenistic philosophical tradition, including its cosmological doctrines. Similar teachings can be found in two of Shabistari’s less celebrated didactic poems, The Book of Felicity (Sa’adat-nama), and the Truth of Certainty about the Knowledge of the Lord of the Worlds (Haqq al-yaqin fi ma’rifat rabb al-‘alamin).

Shabistari’s poetic style and language are occasionally quite obscure, even for an educated Persian speaker. Shabistari had chosen to render complex metaphysical doctrines into verse and, in so doing, was constrained by the conventions of meter and rhyme expected in his day. He claimed that the concise, aphoristic flashes of his spiritual insights came through selfless inspiration, nearly through revelation. Not surprisingly, many of his couplets need years of thought and meditation to digest. Shabistari’s genius can only be appreciated through attentive study, usually with the help of well-informed commentaries. Professor Lewisohn‘s Beyond Faith and Infidelity is as close as non-Persian speakers will get to the best of the original commentaries. His profound understanding of Persian history and the Sufi literary tradition, along with his many years as a practicing Sufi, make this book one of the finest works ever written on Islamic spirituality.