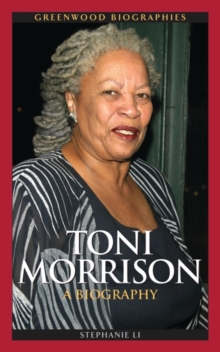 Part of the Greenwood Biographies series

This book is a revealing look at the life and work of Nobel laureate Toni Morrison. Toni Morrison: A Biography looks at the remarkable life of an essential American novelist, whose critically acclaimed, bestselling books offer lively, powerful depictions of black America. Toni Morrison follows the life of the woman born Chloe Ardelia Wofford from her culturally rich childhood in Lorrain, OH, through her spectacular rise as a novelist, educator, and public intellectual.

The book also serves as a basic introduction to the literary influences that shaped Morrison's writing, from the early novels to the breakout success of Song of Solomon; from the overwhelming achievement of Beloved to her most recent book, A Mercy.

The book also examines Morrison's other writing-criticism, essays, edited volumes, children's books-as well as her academic career, her work as an editor at Random House, and her political activism, most notably in the 2008 presidential campaign. * Presents a detailed timeline of Toni Morrison's life and career as a writer and academic* Offers a comprehensive bibliography of Morrison's works along with a bibliography of critical studies of her novels and electronic resources