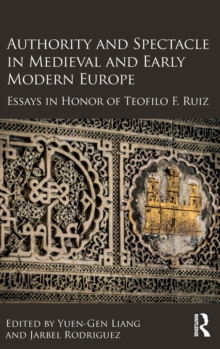 Authority and spectacle in medieval and early modern Europe : essays in honor of Teofilo Ruiz

Bringing together distinguished scholars in honor of Professor Teofilo F.

Ruiz, this volume presents original and innovative research on the critical and uneasy relationship between authority and spectacle in the period from the twelfth to the sixteenth centuries, focusing on Spain, the Mediterranean and Latin America.

Cultural scholars such as Professor Ruiz and his colleagues have challenged the notion that authority is elided with high politics, an approach that tends to be monolithic and disregards the uneven application and experience of power by elite and non-elite groups in society by highlighting the significance of spectacle.

Taking such forms as ceremonies, rituals, festivals, and customs, spectacle is a medium to project and render visible power, yet it is also an ambiguous and contested setting, where participants exercise the roles of both actor and audience.

Chapters in this collection consider topics such as monarchy, wealth and poverty, medieval cuisine and diet and textual and visual sources.

The individual contributions in this volume collectively represent a timely re-examination of authority that brings in the insights of cultural theory, ultimately highlighting the importance of representation and projection, negotiation and ambivalence.