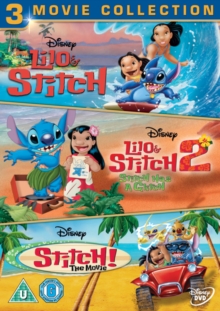 In 'Lilo and Stitch' (2002) Lilo lives with her sister, Nani (Tia Carrere), in the beautiful surroundings of Hawaii.

One day Lilo meets a strange alien who she decides to name Stitch and take home as her pet.

Stitch at first causes trouble by destroying everything he can lay his hands on, but as time passes he becomes accustomed to the Hawaiian ways and is accepted as a regular part of the family.

However, with representatives of Stitch's home planet following hot on his heels, it is unclear how long this happy situation can last.

However, when Stitch, who was a result of one of Dr. Jumba Jookiba (David Odgen Stiers)'s experiments, gets a glitch, their perfect world goes haywire.

Now it's going to take Lilo, Nani, Jumba and a whole lot of 'Ohana' for them to save their funny little friend.

In 'Stitch! The Movie' (2003) Jumba's other experiments come to Earth and Lilo (Chase) and Stitch have to try and prevent the evil Dr. Hamsterviel (Jeff Bennett) from getting his hands on them.