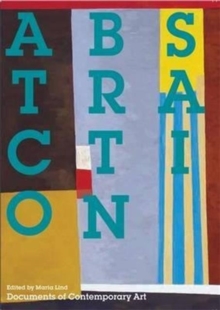 In the 1960s movements as diverse as Latin American neo-concretism, op art and 'eccentric abstraction' disrupted the homogeneity, universality and rationality associated with abstraction, opening up new forms of engagement with the phenomenal world and the possibility of diverse readings of the same forms, ranging from formalist and transcendental to socio-economic and conceptual.

A second discourse that emerges in the 1980s via the writing of Peter Halley, Fredric Jameson and others, engages with abstraction through the consideration of an increasingly abstracted world in terms of its economic, social and political conditions - all increasingly manifested through abstract codes or sites of style.

Such economic abstraction is primarily addressed in art as a subject or theme, but in Deleuze and Guattari's notion of art as abstract machine possibilities emerge for art's role in the construction of a new kind of social reality.

In more recent art a third strand emerges: a form of social abstraction centred on the strategy of withdrawal.