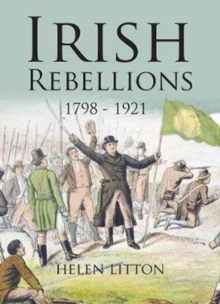 The English invasions of Ireland were never accepted.

Each generation of Irish rebels resisted and, in doing so, faced certain death.

They became martyrs and left behind speeches and watchwords to spark the flames of nationalism and idealism.

Using eyewitness accounts, speeches and illustrative material, Helen Litton describes these most important Irish rebellions, from the United Irishmen of 1798 to the IRA of the War of Independence.

The Irish rebellions through the years of Irish history beginning with the 1798 rebellion told through illustration and word.

These engaging illustrations will bring to life some of the most pivotal events in Irish history.

This illustrated history book will examine the rebellions of Ireland with a focus on the principal figures involved.

Rebellions begun by Irish people who were not afraid to take on a powerful Establishment and claim their right to self-determination.