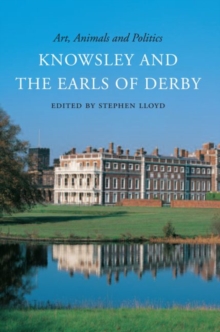 Art, animals, and politics : Knowsley and the Earls of Derby

Since they were created Earls of Derby in 1485, the Stanleys - a great Lancastrian family, whose seat, Knowsley Hall, is near Liverpool - have been significant in the life of the nation as patrons and collectors, sportsmen and politicians.These absorbing essays by a distinguished cast of contributors- led by historian David Starkey, on Lady Margaret Beaufort,the first Countess of Derby, and broadcaster Sir David Attenborough, on Edward Lear's stay at Knowsley - cover key facets of the family's diverse achievements.

The 4th, 5thand 6th Earls were patrons of the Elizabethan theatre; the10th Earl formed an outstanding collection of old master paintings; the 12th Earl founded two classic horse races and married the celebrated actress Elizabeth Farren; the 13th Earl established the largest aviary and menagerie in the country and collected natural history books and watercolours; the14th Earl, leader of the Conservative Party, served three times as Prime Minister; the 15th Earl was Foreign Secretary under Disraeli and Colonial Secretary under Gladstone,while his wife, Mary Derby, became a powerful political influence behind the scenes.Illustrated with works from the Derby Collection, and elsewhere.