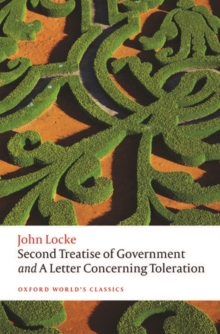 Second treatise of government and A letter concerning toleration

By: Locke, John,  Goldie, Mark (University of Cambridge)(Edited by)

'Man being born...to perfect freedom...hath by nature a power...to preserve his property, that is, his life, liberty and estate.'Locke's Second Treatise of Government (1689) is one of the great classics of political philosophy, widely regarded as the foundational text of modern liberalism. In it Locke insists on majority rule, and regards no government as legitimate unless it has the consent of the people.

He sets aside people's ethnicities, religions, and cultures and envisages political societies which command our assent because they meet our elemental needs simply as humans. His work helped to entrenchideas of a social contract, human rights, and protection of property as the guiding principles for just actions and just societies. Published in the same year, A Letter Concerning Toleration aimed to end Christianity's wars of religion and called for the separation of church and state so that everyone could enjoy freedom of conscience. In this edition of these two major works, Mark Goldie considers the contested nature of Locke's reputation, which is often appropriated by opposing political and religious ideologies. ABOUT THE SERIES: For over 100 years Oxford World's Classics has made available the widest range of literature from around the globe.