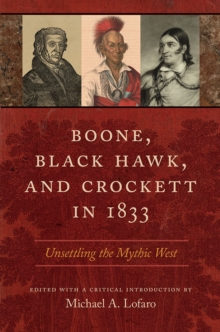 The Life and Adventures of Colonel David Crockett of West Tennessee

By: Lofaro, Michael A.

The legendary Davy Crockett arose simultaneously with the emergence of the historical Crockett as a public figure, and once established, the man and the myth were forevermore entangled.

The present work, his Life and Adventures (1833), ushered in a series of biographical and autobiographical books that thrust Crockett fully onto the national and international scene.

This work, quickly retitled Sketches and Eccentricities, was the most outlandish.

Its purported author, J. S. French, mixed two nineteenth-century genres of storytelling - the Humor of the Old Southwest and the sketch - all presented within a historical framework to create an early version of the King of the Wild Frontier.

The Crockett encountered here is the marksman who can shoot an elk from 140 yards with his beloved rifle, Betsy, grin the bark off a tree knot, and choose bows and arrows as weapons when challenged to a duel by a fellow congressman.

Within a year, Crockett disavowed this book, preferring his autobiography - Narrative of the Life of David Crockett, of the State of Tennessee - but this rollicking story, often bouncing along from tall tale, hunting anecdote, faux moral tale, to humorous pratfall, became a major source for the later biographical writings and a later cultural industry that swept up newspapers, books, political propaganda, plays, and films - and almost every way in which a frontier figure could appear in popular culture. And, while Crockett's image was a source of entertainment and humor, it also pointed toward something far more serious: after his death at the Alamo it presented Americans with a fictional Frontier hero who progressively embodied their views on topics as varied as manliness, manifest destiny, and even white supremacy.

However, the Crockett of Sketches - canny, adaptable, intelligent but not educated, hilarious - was above all a perfect reflection of the aspirations, interests, and beliefs of Jacksonian-era Americans.