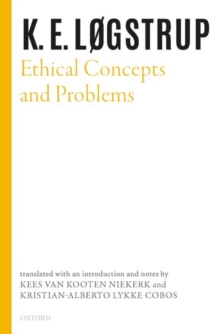 Part of the Selected Works of K.E. Logstrup series

This is first English edition of Ethical Concepts and Problems (1971) by Danish philosopher and theologian K.

E. Logstrup (1905-81). Originally published as a contribution to a textbook of ethics for students of theology, it propounds a philosophical ethics in continuity with Martin Luther's conception of the natural law.

We find here the core idea from The Ethical Demand, that in our dealings with others we are faced with the demand that we take careof them, now conceptualized as the central tenet of an ontological ethics based on human interdependence as a fundamental condition of life.

Later in his career, Logstrup developed a conception of what he called 'the sovereign expressions of life'-spontaneous other-regarding impulses or ways of conduct such astrust, sincerity, and compassion-and these are here described and determined in their relation to the ethical demand and moral norms.

Furthermore, this key text discusses a number of central ethical concepts such as duty, responsibility, will, and choice.

Logstrup also explores the relationship between love of the neighbour and politics, before finally concluding with an extensive discussion of political questions such as cultural policy, democracy, and the right of resistance.

EthicalConcepts and Problems therefore offers an instructive survey of important parts of Logstrup's ethical and political thinking, from theological issues like Luther's doctrine of the bondage of the will, to the ideas of philosophers such as Descartes, Kant, Nietzsche, and Kierkegaard.

In this edition Logstrup'soriginal text is accurately rendered into readable English and paired with an introduction which explains the main themes and wider context of the work.