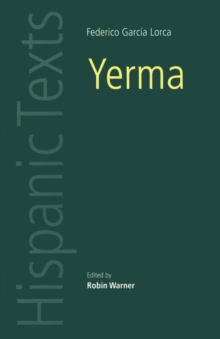 Part of the Hispanic Texts series

The second of Lorca's trilogy of rural dramas, Yerma, is a blend of contrasting moods through which Lorca charts the increasingly destructive obsession of a childless young country wife, and probes the darker zones of human fears and desires.

The play's rich mode of expression - a combination of verbal, visual and auditory images and rhythms - is also geared to celebrating sexual attraction and fertility, creation and procreation. Through his characterization of the play's central figure, Lorca raises the question of women's social status - a controversial question both then and now, and one to which Robin Warner pays particular attention in his critical introduction to the play.

He also examines the links between the dramatic structure of Yerma and the importance of cultural politics during the course of the Second Spanish Republic.

The Spanish text is supported by an introduction and notes in English, as well as by an extensive vocabulary and section of discussion questions. -- .