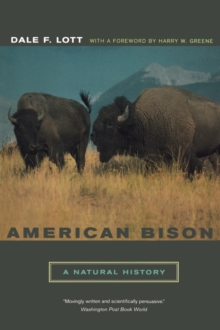 This volume combines scientific information and one man's personal experience in an homage to one of the most magnificent animals to have roamed America's vast, vanished grasslands.

Dale F. Lott, a distinguished behavioural ecologist who was born on the National Bison Range and has studied the buffalo for many years, relates what is known about this iconic animal's life in the wild and its troubled history with humans.

It takes us on a journey into the bison's past and shares a vision for its future, offering along the way a valuable introduction to North American prairie ecology.The book explores the social life and physiology of the bison, describing an entire grassland community.

Lott writes about the wolves, pronghorn, prairie dogs, grizzly bears, and other animals and plants, detailing the interdependent relationship between the bison and Native Americans, and gives a surprising look at the history of the hide hunts that delivered the coup de grace to the already dwindling bison population in a few short years.

Lott's portrayal of the bison ultimately becomes a plea to conserve its wildness and an eloquent meditation on the importance of the wild in our lives.