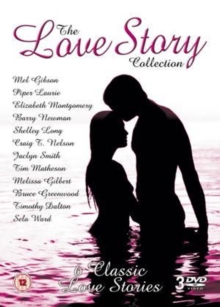 Six romantic dramas. Mel Gibson stars in 'Tim' (1979) as a builder with slight learning difficulties who is often taken advantage of by other people.

When Mary (Piper Laurie) takes him on to work on her yard for the day a friendship develops and soon Tim is working full time for her.

As their friendship grows, people start getting suspicious and accuse Mary of taking advantage of Tim. 'Navigating the Heart' (2000) tells the story of the improbable romance between a cosmopolitan career woman and a small-town fisherman.

While she thrives on the fast-paced life of Manhattan, he loathes pretension and could go days without speaking to anyone.

But when the two are caught together in a perilous situation, they are forced to put aside their pettiness and re-examine their lives.

With external factors stripped away, they begin to fall in love. 'Passion's Way' (1999) is based on the novel 'The Reef' by Edith Wharton.

Set in early 1900s France, the film tells the tale of a widow (Sela Ward) who renews a former romantic interest (Timothy Dalton) - until it is discovered that he has had a past fling with her new nanny (Alicia Witt). 'The Soul Collector' (1999) tells a supernatural tale of divine intervention in which a heavenly being experiences life on earth.

Zach (Bruce Greenwood) is a soul collector, a type of angel who helps bring a person's spirit into the afterlife.

Chosen to experience life on earth, Zach soon falls in love with Rebecca (Melissa Gilbert), a young widow who lives with her son on a farm in the mid-west.

As they rely on Zach more and more, the time for Zach's departure grows ever nearer - or does it?Valerie Bertinelli stars in 'The Promise of Love' (1980).

Set against the background of the Vietnam War, the film tells the story of Kathy Wakeman (Bertinelli), a young woman who gives up her dreams of a college career to marry the man she loves.

Soon after the wedding, Kathy's husband is sent to fight in Vietnam and is tragically killed.

Suddenly all alone and still living on the military base, she struggles to come to terms with her husband's death.

Things go from bad to worse when the military asks her to leave.

Kathy refuses and soon realises she must get her life back on track.

Finding work at the base's recreation centre, she discovers that life may be worth living after all.

Elizabeth Montgomery stars in 'Second Sight - A Love Story' (1984) as Alex, a woman who has been blind for 20 years.

Fiercely independent, Alex has learnt to live with her disability, living as normal a life as possible but at the cost of letting very few people into her private and sheltered world.

One such person trying to get in is art dealer Richard Chapman (Barry Newman).

Alex's world is shattered when she is assaulted by a burglar, leaving her a shadow of the confident person she once was.

For the first time in her life she seeks help in the form of Emma, a guide dog.

With Emma's help, Alex can start to rebuild her life and begin to let love into her heart.