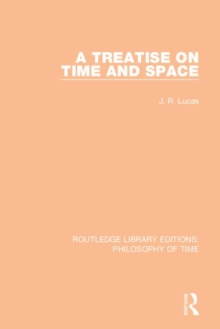 A treatise on time and space

Part of the Routledge Library Editions: Philosophy of Time series

Originally published in 1976. This comprehensive study discusses in detail the philosophical, mathematical, physical, logical and theological aspects of our understanding of time and space.

The text examines first the many different definitions of time that have been offered, beginning with some of the puzzles arising from our awareness of the passage of time and shows how time can be understood as the concomitant of consciousness.

In considering time as the dimension of change, the author obtains a transcendental derivation of the concept of space, and shows why there has to be only one dimension of time and three of space, and why Kant was not altogether misguided in believing the space of our ordinary experience to be Euclidean. The concept of space-time is then discussed, including Lorentz transformations, and in an examination of the applications of tense logic the author discusses the traditional difficulties encountered in arguments for fatalism.

In the final sections he discusses eternity and the beginning and end of the universe.

The book includes sections on the continuity of space and time, on the directedness of time, on the differences between classical mechanics and the Special and General theories of relativity, on the measurement of time, on the apparent slowing down of moving clocks, and on time and probability.