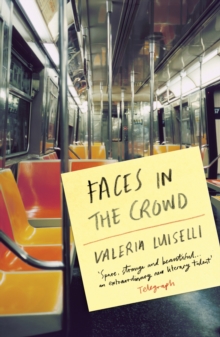 Faces in the crowd

In the heart of Mexico City a woman, trapped in a house and a marriage she can neither fully inhabit nor abandon, thinks about her past.She has decided to write a novel about her days at a publishing house in New York; about the strangers who became lovers and the poets and ghosts who once lived in her neighbourhood.

In particular, one of the obsessions of her youth - Gilberto Owen - an obscure Mexican poet of the 1920s, a marginal figure of the Harlem Renaissance, a busker on Manhattan's subway platforms, a friend and an enemy of Federico Garcia Lorca.

As she writes, Gilberto Owen comes to life on the page: a solitary, faceless man living on the edges of Harlem's writing and drinking circles at the beginning of the Great Depression, haunted by the ghostly image of a woman travelling on the New York subway.

Mutually distorting mirrors, their two lives connect across the decades between them, forming a single elegy of love and loss.