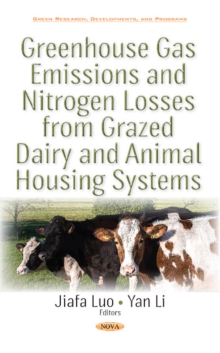 Stand-off pads and animal housing practices (i.e., animal confinement) are increasingly being used in animal grazing systems; these methods are introduced to avoid crop and soil damage, and because it makes herd management easier.

The use of animal houses and stand-off pads to avoid grazing during the risk periods for nitrogen (N) losses could be an effective greenhouse gas (GHG) mitigation technology, and contribute to the overall goal to reduce GHG emissions from agriculture.

However, there is uncertainty about unintended consequences (or pollution swapping) from these farm systems.

Such consequences include potential nitrous oxide (N2O), ammonia (NH3) and methane (CH4) losses from the animal confinement facilities themselves, and following land application of effluent/manure collected from these facilities.

In this book, impacts of the use of stand-off pads and animal housing on farm system GHG emissions and N losses are assessed.

A literature review and targeted field surveys were conducted to investigate animal confinements and their use in the New Zealand grazing dairy farming systems (Chapter One).

Data was collected from published literature and unpublished reports to assess GHG emissions, including N2O, NH3 and CH4, from animal confinements and the collection, storage and subsequent land application of the manure that was generated (Chapters Two-Four).

Some potential management practices and technologies for reducing GHG emissions from animal confinements and the land application of animal manure and slurry were also evaluated (Chapters Two-Six).

Additionally, the LCA methodology and cost effectiveness analysis were used to assess the total GHG emissions of dairy farm systems involving off-paddock facilities over the winter in Waikato and Southland in New Zealand (Chapters Eight and Ten).