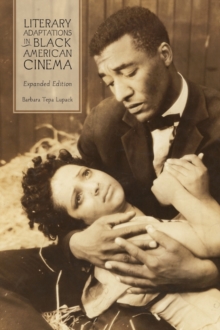 Literary adaptations in black American cinema : from Micheaux to Morrison

The cinematic representation of blacks, especially in silent and early film, was shaped not only by the sentimental racism of the culture but also by the popular literature that distorted black experience and restricted black characters to minor, stereotyped roles.

By contrast, in the works of black writers from Oscar Micheaux to Toni Morrison, the black experience has been more fully, more accurately, and usually more sympathetically realized; and from the early days of film, select filmmakers have looked to that literature as the basis for their productions. This revised and expanded historical examination of the practice of such adaptation offers telling insights into the portrayal -- and progress -- of blacks in American movies and culture.

This volume reveals that while blacks, on screen and behind the scenes, were often forced to re-create demeaning film stereotypes, they learned how to subvert and exploit the artificiality of their caricatures.

It also reveals the ways that black filmmakers, beginning with Micheaux, Noble and George Johnson, and their less prominent colleagues like Emmett Scott, worked within the conventions of cinema and society yet managed to produce films that were, at their best, unconventional and pioneering.

Lupack demonstrates that as far back as the 1920s and 1930s, black authors like Paul Laurence Dunbar and Langston Hughes already recognized the need for involvement with film production in order to create pictures that were more representative of black life.

The book illustrates the fact that, in recent years, as more black voices found their way to the screen, among the strongest were the voices of women. And above all, it confirms that within the rich tradition of black literature of all genres lie many exciting cinematic possibilities for audiences of all colors. Barbara Tepa Lupack has written extensively on the topic of literary adaptations in cinema and is coauthor (with Alan Lupack) of Illustrating Camelot and King Arthur in America.