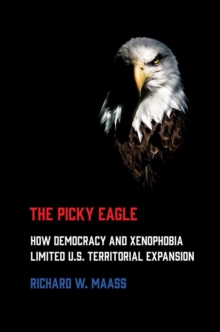 The Picky Eagle explains why the United States stopped annexing territory by focusing on annexation's domestic consequences, both political and normative.

It describes how the U.S. rejection of further annexations, despite its rising power, set the stage for twentieth-century efforts to outlaw conquest.

In contrast to conventional accounts of a nineteenth-century shift from territorial expansion to commercial expansion, Richard W.

Maass argues that U.S. ambitions were selective from the start. By presenting twenty-three case studies, Maass examines the decision-making of U.S. leaders facing opportunities to pursue annexation between 1775 and 1898.

U.S. presidents, secretaries, and congressmen consistently worried about how absorbing new territories would affect their domestic political influence and their goals for their country.

These leaders were particularly sensitive to annexation's domestic costs where xenophobia interacted with their commitment to democracy: rather than grant political representation to a large alien population or subject it to a long-term imperial regime, they regularly avoided both of these perceived bad options by rejecting annexation.

As a result, U.S. leaders often declined even profitable opportunities for territorial expansion, and they renounced the practice entirely once no desirable targets remained. In addition to offering an updated history of the foundations of U.S. territorial expansion, The Picky Eagle adds important nuance to previous theories of great-power expansion, with implications for our understanding of U.S. foreign policy and international relations.