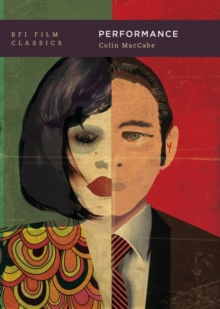 Directed by Donald Cammell and Nicolas Roeg, and starring James Fox, Mick Jagger and Anita Pallenberg, Performance was filmed in 1968, but not released until 1970.

When its studio backers saw the director's cut, they were so shocked by the film's sexual explicitness and formal radicalism that attempts were made to destroy the negative.

In his study of the film, Colin MacCabe draws on extensive interviews with surviving participants to present the definitive history of the making of Performance, as well as a new interpretation of its consummate artistry. This edition includes an afterword reflecting on the film 50 years on, and the reasons for its continuing classic status.

Performance's extraordinary power, suggests MacCabe, comes partly from its entrancing portrayal of London in the late 1960s, but primarily from its full scale assault on any notion of normality, not simply at the level of content but also of form.

The remarkable ending, when the thriller and the psychodrama merge into one, means that there is no comfortable resolution to the film's meanings.

Performance is one of those rare narrative film which takes us into the complexity of sound and image without the comforting guarantee of a safe exit.