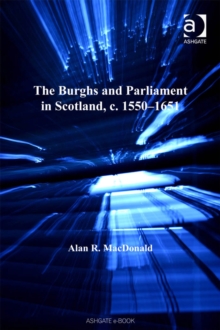 Existing studies of early modern Scotland tend to focus on the crown, the nobility and the church.

Yet, from the sixteenth century, a unique national representative assembly of the towns, the Convention of Burghs, provides an insight into the activities of another key group in society.

Meeting at least once a year, the Convention consisted of representatives from every parliamentary burgh, and was responsible for apportioning taxation, settling disputes between members, regulating weights and measures, negotiating with the crown on issues of concern to the merchant community.

The Convention's role in relation to parliament was particularly significant, for it regulated urban representation, admitted new burghs to parliament, and co-ordinated and oversaw the conduct of the burgess estate in parliament.

In this, the first full-length study of the burghs and parliament in Scotland, the influence of this institution is fully analysed over a one hundred year period.