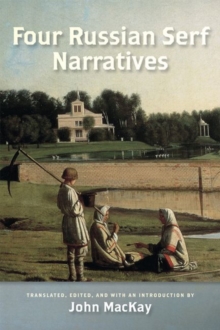 Part of the Wisconsin Studies in Autobiography series

Although millions of Russians lived as serfs until the middle of the nineteenth century, little is known about their lives.

Identifying and documenting the conditions of Russian serfs has proven difficult because the Russian state discouraged literacy among the serfs and censored public expressions of dissent.

To date scholars have identified only twenty known Russian serf narratives. ""Four Russian Serf Narratives"" contains four of these accounts and is the first translated collection of autobiographies by serfs.

Scholar and translator John MacKay brings to light for an English-language audience a diverse sampling of Russian serf narratives, ranging from an autobiographical poem to stories of adventure and escape. ""Autobiography"" (1785) recounts a highly educated serf's attempt to escape to Europe, where he hoped to study architecture.

The long testimonial poem ""News about Russia"" (ca. 1849) laments the conditions under which the author and his fellow serfs lived.

In ""The Story of My Life and Wanderings"" (1881) a serf tradesman tells of his attempt to simultaneously escape serfdom and captivity from Chechen mountaineers.

The fragmentary ""Notes of a Serf Woman"" (1911) testifies to the harshness of peasant life with extraordinary acuity and descriptive power.

These accounts offer readers a glimpse, from the point of view of the serfs themselves, into the realities of one of the largest systems of unfree labor in history.

The volume also allows comparison with slave narratives produced in the United States and elsewhere, adding an important dimension to knowledge of the institution of slavery and the experience of enslavement in modern times.