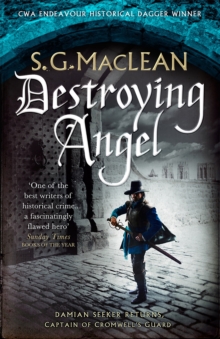 Part of the The Seeker series

WINNER OF THE 2019 CWA HISTORICAL DAGGER'A gripping tale of crime and sedition' Sunday Times on The Black Friar'The best historical crime novel of the year' Sunday Express on The SeekerCaptain Damian Seeker has gone north.

Charged with preparing the way for the rule of the major-generals, he is now under the command of Colonel Robert Lilburne at York.

But when Lilburne orders him to a small village on the North York moors with details of the stringent new anti-Royalist laws, Seeker finds that what should be a routine visit will reveal a plot to rival anything in scheming LondonAn invitation to dinner at the house of local businessman Matthew Pullan lifts the lid on the bubbling cauldron of grudges and resentment that is Faithly village.

The local constable, drunk on the tiny bit of power he holds, using it to avenge old resentments.

The hated lord of the manor, the last of a staunchly Royalist family who has managed to avoid suspicion of treachery - for now.

The vicar on trial for his job and his home, accused of ungodly acts. And the Pullans themselves, proudly Puritan but disillusioned with Cromwell's government, respected and despised in Faithly in equal measure.

The man for whom this unlikely gathering was organised - The Trier, the enforcer of Puritan morality for the local villages - hasn't shown up. And by the end of the night, on of those gathered around Matthew Pullan's table will be fatally poisoned. Seeker must find out the motive behind the death - mushroom misidentification, petty revenge, or part of a larger plot against Cromwell's government in the north?

But who in Faithly, if anyone, can he trust? And when the most painful part of his past reappears after eleven years, will the Seeker meet his match?