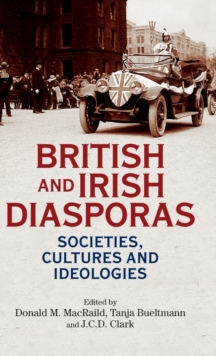 People from the British and Irish Isles have, for centuries, migrated to all corners of the globe.Wherever they went, the English, Irish, Scots, Welsh, and and even sub-national, supra-regional groups like the Cornish, co-mingled, blended and blurred.

Yet while they gradually integrated into new lives in far-flung places, British and Irish Isle emigrants often maintained elements of their distinctive national cultures, which is an important foundation of diasporas.

Within this wider context, this volume seeks to explore the nature and characteristics of the British and Irish diasporas, stressing their varying origins and evolution, the developing attachments to them, and the differences in each nation's recognition of their own diaspora.

The volume thus offers the first integrated study of the formation of diasporas from the islands of Ireland and Britain, with a particular view to scrutinizing the similarities, differences, tensions and possibilities of this approach. -- .