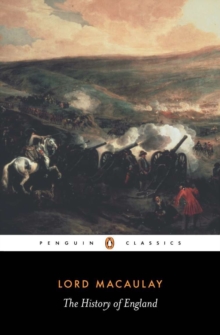 The history of England

One of the greatest figures of his age, Thomas Babington Macaulay (1800-59) was widely admired throughout his life for his prose, poetry, political acumen and oratorical skills.

Among the most successful and enthralling histories ever written, his History of England won instantaneous success following the publication of its first volumes in 1849, and was rapidly translated into most European languages.

Beginning with the Glorious Revolution of 1688 and concluding at the end of the reign of William III in 1702, it illuminates a time of deep struggle throughout Britain and Ireland in vivid and compelling prose.

But while Macaulay offers a gripping narrative, and draws on a wide range of sources including historical accounts and creative literature, his enduring success also owes a great deal to his astonishing ability to grasp, and explain, the political reality that has always underpinned social change.