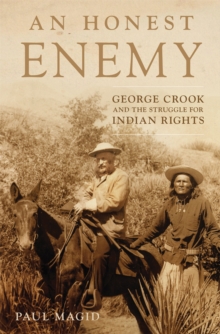 An Honest Enemy : George Crook and the Struggle for Indian Rights

Over the course of his military career, George Crook developed empathy and admiration for American Indians both as foes and as allies.

As Paul Magid has demonstrated in the previous two volumes of his groundbreaking biography, this experience prepared Crook well for his metamorphosis from Indian fighter to outspoken advocate of Indian rights. An Honest Enemy is the third and final volume of Magid's account of George Crook's life and involvement in the Indian wars.

Using rarely tapped information, including Crook's own diaries, the work documents in dramatic detail the general's arduous and dangerous campaigns against the Chiricahua Apaches and their leader Geronimo, action that forms a backdrop to the transformation in the general's role vis-a-vis Native Americans. In a story by turns harrowing and tragic, Magid details the plight of Indians who, in the aftermath of their defeat, were consigned to reservations too barren to sustain them, where they were subjected to impoverishment, indifference, and in many cases, outright corruption.

With growing anger, Crook watched as many tribes faced death from starvation and disease and, unwilling to passively accept their fate, desperately sought to flee their reservations and return to their homelands.

Charged with the grim task of returning the Indians to such conditions, Crook was forced to choose between fulfilling his duties as a soldier and his humanitarian values.

Magid describes Crook's struggle to reconcile these conflicting concerns while promoting policies he regarded as essential to the welfare of the Indians in the face of a hostile public, jealous fellow officers, and an unsympathetic government that regarded his efforts as quixotic and misguided.

Here is a tale that readers will not soon forget.