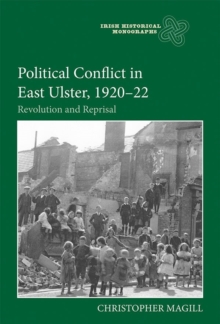 Most studies of the Irish Revolution focus on republican violence and on the establishment of the Irish Free State in 1922.

This book, on the other hand, based on extensive original research, considers the situation in the north of Ireland, which was predominantly unionist and affected much less by republican violence.

The book examines unionist violence, including the riots during which Catholic homes and businesses in Lisburn were burned, discusses the establishment of the state of Northern Ireland and its security forces, and explores largely constitutional response of Northern Ireland's nationalist community and how this community was affected.

It discusses the relationship between politicians, the British government and local communities, assesses the degree to which unionist violence was a reaction to republican violence, and provides a detailed analysis of the Northern Irish security force, the Ulster Special Constabulary.

The book concludes that although the Ulster Special Constabulary was clearly drawn from one community, claims that its membership was deliberately recruited according to its ability to inflict havoc on the Catholic population are not correct. CHRISTOPHER MAGILL completed his doctorate at Queen's University, Belfast.