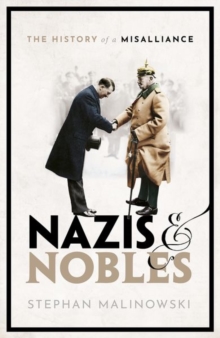 Nazis and nobles : the history of a misalliance

In the mountain of books that have been written about the Third Reich, surprisingly little has been said about the role played by the German nobility in the Nazis' rise to power.

While often confidently referred to, the 'fateful' role played by the German nobility is rarely, if ever, investigated in any real detail.

Nazis and Nobles now fills this gap, providing the first systematic investigation of the role played by the nobility in German political lifebetween Germany's defeat in the First World War in 1918 and the consolidation of Nazi power in the 1930s.

As Stephan Malinowski shows, the German nobility was too weak to prevent the German Revolution of 1918 but strong enough to take an active part in the struggle against the Weimar Republic.

In a real twist of historical irony, members of the nobility were as prominent in the destruction of Weimar democracy as they were to be years later in Graf Stauffenberg's July 1944 bomb plot against Hitler.

In this skilful portrait of an aristocratic world that was soon to disappear, Malinowski gives us forthe first time the in-depth story of the German nobility's social decline and political radicalization in the inter-war years - and the troubled mesalliance to which this was to lead between the majority of Germany's nobles and the National Socialists.