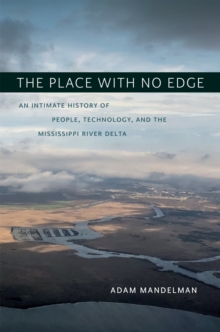 The Place with No Edge : An Intimate History of People, Technology, and the Mississippi River Delta

Part of the The Natural World of the Gulf South series

In The Place with No Edge, Adam Mandelman follows three centuries of human efforts to inhabit and control the lower Mississippi River delta, the vast watery flatlands spreading across much of southern Louisiana.

He finds that people's use of technology to tame unruly nature in the region has produced interdependence with, rather than independence from, the environment. Created over millennia by deposits of silt and sand, the Mississippi River delta is one of the most dynamic landscapes in North America.

From the eighteenth-century establishment of the first French fort below New Orleans to the creation of Louisiana's Coastal Master Plan in the 2000s, people have attempted to harness and master the landscape through technology.

He demonstrates that even as people seemed to gain control over the environment, they grew more deeply intertwined with, and vulnerable to, it. The greatest folly, Mandelman argues, is to believe that technology affords mastery.

Environmental catastrophes of coastal land loss and petrochemical pollution may appear to be disconnected, but both emerged from the same fantasy of harnessing nature to technology.

Similarly, the levee system's failures and the subsequent deluge after Hurricane Katrina owe as much to centuries of human entanglement with the delta as to global warming's rising seas and strengthening storms. The Place with No Edge advocates for a deeper understanding of humans' relationship with nature.

It provides compelling evidence that altering the environment, whether to make it habitable, profitable, or navigable, inevitably brings a response, sometimes with unanticipated consequences.

Mandelman encourages a mindfulness of the ways that our inventions engage with nature and a willingness to intervene in responsible, respectful ways.