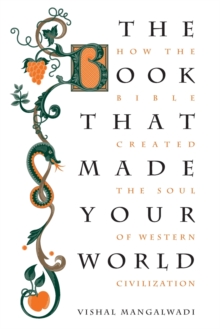 The Book that Made Your World : How the Bible Created the Soul of Western Civilization

Understand where we came from. Whether you're an avid student of the Bible or a skeptic of its relevance, The Book That Made Your World will transform your perception of its influence on virtually every facet of Western civilization. Indian philosopher Vishal Mangalwadi reveals the personal motivation that fueled his own study of the Bible and systematically illustrates how its precepts became the framework for societal structure throughout the last millennium. From politics and science, to academia and technology, the Bible's sacred copy became the key that unlocked the Western mind. Through Mangalwadi's wide-ranging and fascinating investigation, you'll discover:What triggered the West's passion for scientific, medical, and technological advancementHow the biblical notion of human dignity informs the West's social structure and how it intersects with other worldviewsHow the Bible created a fertile ground for women to find social and economic empowermentHow the Bible has uniquely equipped the West to cultivate compassion, human rights, prosperity, and strong familiesThe role of the Bible in the transformation of educationHow the modern literary notion of a hero has been shaped by the Bible's archetypal protagonistJourney with Mangalwadi as he examines the origins of a civilization's greatness and the misguided beliefs that threaten to unravel its progress. Learn how the Bible transformed the social, political, and religious institutions that have sustained Western culture for the past millennium, and discover how secular corruption endangers the stability and longevity of Western civilization. Endorsements:"This is an extremely significant piece of work with huge global implications.

Vishal brings a timely message." (Ravi Zacharias, author, Walking from East to West and Beyond Opinion)"In polite society, the mere mention of the Bible often introduces a certain measure of anxiety.

A serious discussion on the Bible can bring outright contempt.

Therefore, it is most refreshing to encounter this engaging and informed assessment of the Bible's profound impact on the modern world.

Where Bloom laments the closing of the American mind, Mangalwadi brings a refreshing optimism." (Stanley Mattson, founder and president, C.