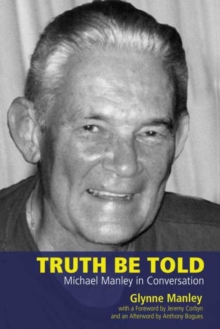 By: Manley, Glynne,  Corbyn, Jeremy(Foreword by)

Michael Manley is perhaps the most written about and the best-chronicled leader of any Caribbean nation of the modern era.

Yet none of the three published biographies or the numerous articles and analyses of his legacy as Jamaica's most controversial leader has succeeded in taking readers beyond his public persona to reveal who Michael Manley really was - until now - and in his own words. Truth be Told is not Michael Manley's autobiography, but it is as close to one the world will ever get.

Rather, it is the transcribed text of three years of taped interviews conducted by his wife Glynne between 1993 and 1996.

Manley passed in 1997. Here is Michael Manley, no doubt with some presentiment of his impending mortality and having made a sacred covenant with Glynne to tell nothing but the truth, revealing his most intimate thoughts and feelings, recollections and experiences from boyhood days to his exit from political life and beyond. Twenty-two years after his passing, the release of these interviews is an event unprecedented in the annals of the political history of any nation.

Their historical value is priceless. Inevitably in the interviews, Manley expresses opinions and makes comments that could be embarrassing and even hurtful to public figures and their families.

For this reason portions of the raw text have been redacted but this has in no way, reduced the impact and authenticity of the overall text.