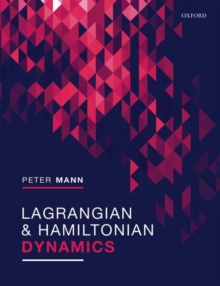 An introductory textbook exploring the subject of Lagrangian and Hamiltonian dynamics, with a relaxed and self-contained setting.

Lagrangian and Hamiltonian dynamics is the continuation of Newton's classical physics into new formalisms, each highlighting novel aspects of mechanics that gradually build in complexity to form the basis for almost all of theoretical physics.

Lagrangian and Hamiltonian dynamics also acts as a gateway to more abstract concepts routed indifferential geometry and field theories and can be used to introduce these subject areas to newcomers. Journeying in a self-contained manner from the very basics, through the fundamentals and onwards to the cutting edge of the subject, along the way the reader is supported by all the necessary background mathematics, fully worked examples, thoughtful and vibrant illustrations as well as an informal narrative and numerous fresh, modern and inter-disciplinary applications. The book contains some unusual topics for a classical mechanics textbook.