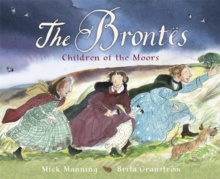 The Brontèes : children of the moors

By: Manning and Granstroem, Mick and Brita

Produced to coincide with 200th anniversary of the birth of Charlotte Bronte, this book introduces the three extraordinary Bronte sisters: Charlotte, Emily and Anne.

We also meet their brother Branwell. With a mix of strong story-telling and wonderful illustration, Mick Manning and Brita Granstroem relate the sister's tragically short lives in the remote village of Haworth in the Yorkshire Dales.

They explore how the girls were inspired to become writers and the sensation their books caused when people realised they had been written by women.

Each of the sister's greatest novels, Jane Eyre (Charlotte), The Tenant of Wildfell Hall (Anne) and Wuthering Heights (Emily), are simply retold in engaging comic-strip form. The illustrations and text of this book really capture the life of the children of the moors and how the magic and wildness of their surroundings inspired their work.

It is perhaps not surprising as Mick Manning was born and brought up in Haworth and, as a child, even played a shepherd boy in a BBC adapation of Wuthering Heights.

The title has been replaced. To check if this specific edition is still available please contact Customer Care +44(0)1482 384660 or schools.services@brownsbfs.co.uk, otherwise please click 9781445147321 to take you to the new version.