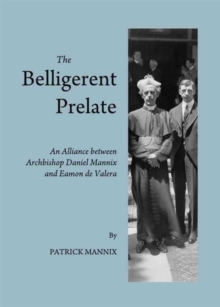 The Belligerent Prelate : An Alliance between Archbishop Daniel Mannix and Eamon de Valera

This book is an examination and evaluation from a historical perspective of the alliance that was established and forged between the former Taoiseach and President of Ireland, Eamon de Valera, and the former President of Maynooth and Archbishop of Melbourne, Australia, Dr Daniel Mannix.

The book will examine how the alliance between the two men played a pivotal role in Ireland's push for independence.

The Archbishop's role is used as a symbol of the vast Irish diaspora worldwide and how their support, both financially and physically through demonstrations for Ireland, helped keep the push for autonomy alive.

Having examined the role the Archbishop played in his alliance with de Valera and the clergy, the book appraises how Dr Mannix, so revered at one stage in Irish society, became such an isolated figure after 1925.

Irish history has largely neglected the role of the Archbishop.

This historical analysis, grounded in research of both primary and secondary sources including previously undocumented oral evidence, archival papers, written public and private correspondence between the two characters and visual sources, will help to replenish his role.