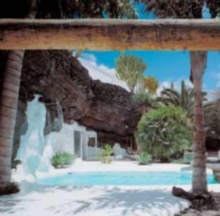 Part of the Opus series

Text in English, German and Spanish. Over the last decade the island of Lanzarote has become one of the favourite tourism destinations in the Canary Islands.

However, our interest is more one of artistic than of touristic discovery, and this would be virtually unthinkable without the work of an artist who fell in love with this wonderful paradise.

We refer to Cesar Manrique (1919-1992), who was able to see and reveal to us the unique beauties arising out of the happy marriage of the four elements believed by the Greeks to form the whole of creation: air, earth, fire and water.

In fact, after returning to his island in 1968 after a period spent in New York, Manrique dedicated himself passionately to realising his utopia, to renew Lanzarote out of his own sources.

Among Manrique's best known works on Lanzarote are the Casa Museo del Campesino, the Jameos del Agua, the Mirador del Rio, the Cactus Garden and his own house in the Taro de Tahiche.

Manrique's house in Taro de Tahiche, which nowadays houses the Cesar Manrique Foundation, can be considered as a 'work in progress' as it was built over a period of almost 25 years and was still not completed upon the artist's death. Arising out of the five interconnected volcanic bubbles of the underground storey, it has become a metaphor for the amorous meeting of man with Mother Earth, the latter being understood, to use Bruno Taut's expression, as 'a fine home for living'.

The spaces on the upper floor can be virtually mistaken for the white cubic buildings dispersed throughout the island.

But when we cross their thresholds, we have the unique feeling that here something was created which is really new.

In fact, Manrique -- enemy in equal measure of the 'pastiche' of regionalism and the off-key International Style blind to differentiation -- sifted the vernacular with certain modern filters such as Frank Lloyd Wright, Mies van der Rohe or Le Corbusier, and at the same time he gave it such a specific stamp that the final result became indigenous and unmistakable.

Simon Marchan Fiz is professor of aesthetics in Madrid.

The photographs shown in this book are the best photographic interpretation of one of Manrique's work up to now.