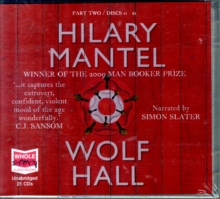 By: Mantel, Hilary,  Slater, Simon(Read by)

This title is a winner of the Man Booker Prize for Fiction 2009.

It is a special Edition featuring Exclusive Author Interview on Bonus CD.

Tudor England. Henry VIII is on the throne, but has no heir. Cardinal Wolsey is charged with securing his divorce.

Into this atmosphere of distrust comes Thomas Cromwell - a man as ruthlessly ambitious in his wider politics as he is for himself.

His reforming agenda is carried out in the grip of a self-interested parliament and a king who fluctuates between romantic passions and murderous rages.

This recording is unabridged. Typically abridged audiobooks are not more than 60 per cent of the author's work and as low as 30 per cent with characters and plotlines removed.