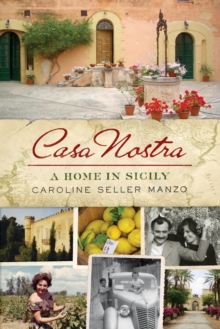 Casa Nostra : a home in Sicily

Although she spoke little Italian and he practically no English, both were undeniably smitten.

After only a few more meetings, Seller was invited to stay with Manzo's family in the beautiful town of Mazaro del Vallo, Sicily.

Here, she was introduced to the loveably eccentric Manzo clan - including Marcello's larger-than-life mother Maria, brothers Silvio and Pilli, and a score of other relatives - who had lost everything they had except their magnificent but crumbling villa, Santa Maria.Over time, Seller and Manzo married, settled in Milan, and started their own family, but Santa Maria was never far from their thoughts.

After much debate, Marcello and his brothers united to renovate the deteriorating villa.

Determined in their mission but not entirely prepared for what they were getting into, the Manzos started a long restoration process full of devastating setbacks, hilarious mishaps, and ultimately breathtaking results which brought them closer together than ever before.