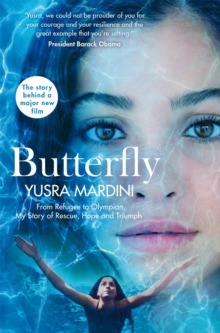 Butterfly : from refugee to Olympian, my story of rescue, hope and triumph

The inspirational story behind the film The Swimmers on Netflix'An extraordinary tale of bravery, survival, and winsome, never-give-up moxie.

It is impossible not to be won over by Yusra.' - Khaled HosseiniIt's important the world understands what many ordinary people must endure to find a safe place to live.

If it will help others, I'll tell my story a million times. When war broke out in her native Syria, Yusra Mardini fled to the Turkish coast in 2015 and boarded a small dinghy full of refugees bound for Greece.

When the small and overcrowded boat's engine cut out, it began to sink.

Instinctively, Yusra and her sister took to the treacherous open water and guided the boat for three and a half hours, helped by two other refugees, until they eventually landed on Lesbos, saving the lives of the passengers aboard. Butterfly is the story of that remarkable woman, whose journey started in a war-torn suburb of Damascus and took her through Europe to Berlin and from there to the Olympic Games in Rio de Janeiro and Tokyo. Yusra Mardini is an athlete, one of People magazine's twenty-five women changing the world, on the list of TIME Magazine's most influential teens, and one of the the youngest UNHCR Goodwill Ambassadors.

Yusra's and her sister Sara's story is the subject of a major Netflix film documenting her life, written by Jack Thorne. Now with an updated afterword for the paperback edition.