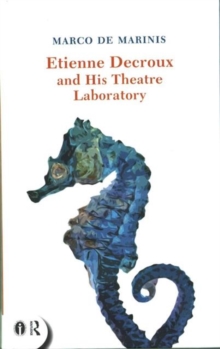 Etienne Decroux and his theatre laboratory

Part of the Routledge ICARUS series

Etienne Decroux and His Theatre Laboratory is based on the long-awaited translation of Marco De Marinis' monumental work on mime in the twentieth century: Mimo e teatro nel Novecento (1993).

Mime is a theatrical form of ancient tradition. In the nineteenth century, it saw both apogee and crisis in the west with the realistic and gesticulating 'white pantomime'.

In the twentieth century, it un derwent a radical overhaul, transforming into an 'abstract' corporeal art that shunned imitation and narrative, and which instead tended towards the plastic, elliptic, allusive, and symbolic transposition of actions and situations. This book is the result of detailed investi gations, based on contemporary accounts and obscure or unpublished materials.

Through the examination of the creative, pedagogical, and theoretical work of the 'inventor' of the new mime art, Etienne Decroux, De Marinis focuses on the different assumptions underlying the various modes of the prob lematic presence of mime in the theatre of the twentieth century: from the utopia of a 'pure' theatre, attributed to the sole essence of the actor, to its decline into a closed poetic genre often nostalgi cally stuck in the past; from mime as a pedagogical tool for the actor to mime as an expressive and virtuosic means in the hands of the director.