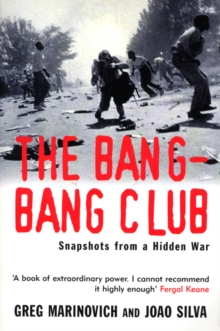 Arrow
1407075233 / 9781407075235
eBook (EPUB)
968.060922
30/11/2012
Available
England
English
198 pages
Copy: 10%; print: 10%
Reprint. Description based on print version record. Originally published: London: Heinemann, 2000.
The Bang-Bang Clubwas a group of four young war photographers, friends and colleagues: Ken Oosterbroek, Kevin Carter, Greg Marinovich and Joao Silva, war correspondants during the last years of apartheid, who took many of the photographs that encapsulate the final violent years of racist white South Africa. Two of them won Pulitzer Prizes for individual photos. Ken, the oldest and a mentor to the others, died, accidentally shot while working; Kevin, the most troubled of the four, committed suicide weeks after winning his Pulitzer for a photograph of a starving baby in the Sudanese famine. Written by Greg and Joao,The Bang-Bang Clubtells their uniquely powerful war stories. It tells the story of four remarkable young men, the stresses, tensions and moral dilemmas of working in situations of extreme violence, pain and suffering, the relationships between the four and the story of the end of apartheid. An immensely powerful, riveting and harrowing book, and an invakuable contribution to the literary genre of war photography. An eye-opening book for readers of Susan Sontag.