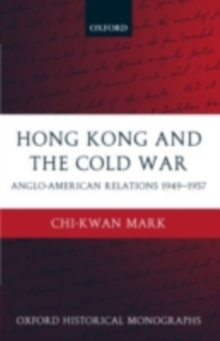 After 1949, the British Empire in Hong Kong was more vulnerable than the lack of Chinese demand for return and the success of Hong Kong's economic transformations might have suggested.

Its vulnerability stemmed as much from Britain's imperial decline and America's Cold War requirements as from a Chinese threat.

It culminated in the little known '1957 Question', a year when the British position in Hong Kong appeared more uncertain than any time since 1949.This is the first scholarly study that places Hong Kong at the heart of the Anglo-American relationship in the wider context of the Cold War in Asia.

Unlike existing works, which tend to treat British and US policies in isolation, this book explores their dynamic interactions - how the two allies perceived, responded to, and attempted to influence each other's policies and actions.

It also provides a major reinterpretation of Hong Kong's involvement in the containment of China.

Dr Mark arguesthat, concerned about possible Chinese retaliation, the British insisted and the Americans accepted that Hong Kong's role should be as discreet and non-confrontational in nature as possible.

Above all, top decision-makers in Washington evaluated Hong Kong's significance not in its own right, but inthe context of the Anglo-American relationship: Hong Kong was seen primarily as a bargaining chip to obtain British support for US policy elsewhere in Asia.By using a variety of British and US archival material as well as Chinese sources, Dr Mark examines how the British and US government discussed, debated, and disagreed over Hong Kong's role in the Cold War, and reveals the dynamics of the Anglo-American alliance and the dilemmas of small allies in a global conflict.