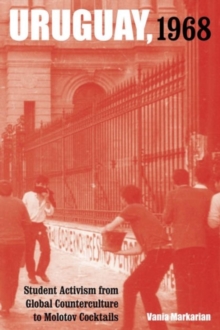 Part of the Violence in Latin American History series

Though some have argued that these young-radical movements were inspired by the culture and politics of social movements burgeoning in Europe and the United States, youth activism developed its own distinct form in Latin America.

In this book, Vania Markarian explores how the Uruguayan student movement of 1968 shaped leftist politics in the country for decades to come.

She considers how students invented their own new culture of radicalism to achieve revolutionary change in Uruguay and in Latin America as a whole.

By exploring the intersection of activism, political violence, and youth culture, Uruguay, 1968 offers new insights about such subjects as the "New Left" and "Revolutionary Left" that are central to our historical understanding of the 1960s across the globe.