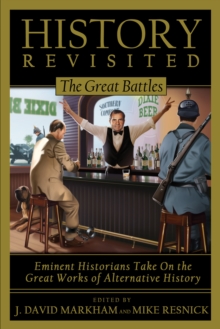 Flynn, and editor Mike Resnick and submits them to scrutiny by seven eminent historians to find out just how probable the events they describe really are.

Addressing pivotal historical events--including the dropping of the atomic bomb on Japan, the Battle of New Orleans, radical politics and Southern strategy in the mid-20th century, the Napoleonic wars, Alcibiades's sack of Syracuse, the American Civil War, and Kenya's fight for independence from Britain--this book seeks to find out how different circumstances could have affected world history. Historians present intriguing questions about these events, such as: Could our atomic bomb policy really have been changed by one faulty screw?

What if Napoleon had become emperor of the United States, leading such heroes as Crockett and Houston in the Battle of New Orleans?

Would Admiral Nelson's defection to France really have altered the course of the Napoleonic wars?Would President Lincoln's assassination during the Gettysburg Address have left the Confederacy as a separate country? From one end of the historical spectrum to the other, this book looks at what didn't happen in military history to gain a richer understanding of all that did.