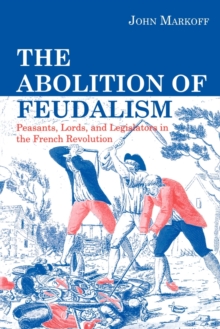 The Abolition of Feudalism : Peasants, Lords, and Legislators in the French Revolution

One of the most important results of the French Revolution was the destruction of the old feudal order, which for centuries had kept the common people of the countryside subject to the lords.

In this book, John Markoff addresses the ways in which insurrectionary peasants and revolutionary legislators joined in bringing "the time of the lords" to an end and how, in that ending, seigneurial rights came to be central to the very sense of the Revolution.

He traces the interaction of peasants and legislators, showing how they confronted, challenged, and implicitly negotiated with one another during the course of events. Contrary to many historians who see the source of revolutionary change in elite culture, Markoff argues that peasant insurrection was a crucial element of the transformation of France.

Of particular importance to the study is Markoff's analysis of the unique cahiers de doleances, the lists of grievances drawn up in 1789 by rural communities, urban notables, and nobles alike.

These documents are invaluable for understanding the Revolution, but until the pioneering work of Markoff and Gilbert Shapiro, they had not been studied systematically at the national level.

In addition to an unprecedented quantitative analysis of the cahiers, Markoff traces the ebb and flow of peasant insurrection across half a decade of revolutionary turbulence.

He also offers qualitative analysis through his use of the records of the legislative debates as well as the memoirs and journals of the legislators. The Abolition of Feudalism breaks new ground in charting patterns of grievance and revolt in one of the most important social and political upheavals in history.