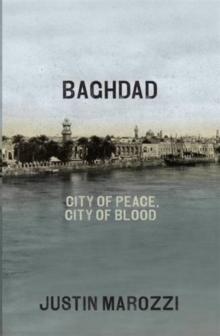 In Baghdad: City of Peace, City of Blood, celebrated young travelwriter-historian Justin Marozzi gives us a many-layered history of one of the world's truly great cities - both its spectacular golden ages and its terrible disasters'Justin Marozzi is the most brilliant of the new generation of travelwriter-historians' - Sunday TelegraphOver thirteen centuries, Baghdad has enjoyed both cultural and commercial pre-eminence, boasting artistic and intellectual sophistication and an economy once the envy of the world.

It was here, in the time of the Caliphs, that the Thousand and One Nights were set.

Yet it has also been a city of great hardships, beset by epidemics, famines, floods, and numerous foreign invasions which have brought terrible bloodshed.

This is the history of its storytellers and its tyrants, of its philosophers and conquerors. Here, in the first new history of Baghdad in nearly 80 years, Justin Marozzi brings to life the whole tumultuous history of what was once the greatest capital on earth. Justin Marozzi is a Councillor of the Royal Geographic Society and a Senior Research Fellow at Buckingham University.

He has broadcast for BBC Radio Four, and regularly contributes to a wide range of publications, including the Financial Times, for which he has worked in Iraq, Afghanistan and Darfur.

His previous books include the bestselling Tamerlane: Sword of Islam, a Sunday Telegraph Book of the Year (2004), and The Man Who Invented History: Travels with Herodotus.


The title has been replaced. To check if this specific edition is still available please contact Customer Care +44(0)1482 384660 or schools.services@brownsbfs.co.uk, otherwise please click 9780141047102 to take you to the new version.