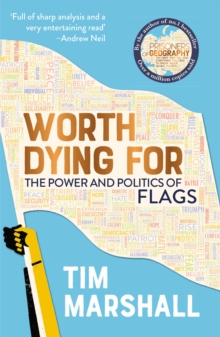 Worth dying for: the power and politics of flags

Flags have been the visual representation of our hopes and our destinies.

We wave them. Burn them. March under their colours. And still, in the 21st century, we die for them. Flags fly at the UN, they fly on the Arab street, they fly from front porches in Texas.

The power of flags runs a lot deeper than we often realise.

Many have hidden histories that still inform the present, representing what a nation thinks it is, or wants to be.

The world is a confusing place right now and we need to understand the symbols, old and new, that people are rallying round.

From the renewed sense of nationalism in China, to troubled identities in Europe and the US, to the carefully constructed flag of Islamic State, Tim Marshall unravels the past and present to provide insight into the symbols that continue to unite and divide us.