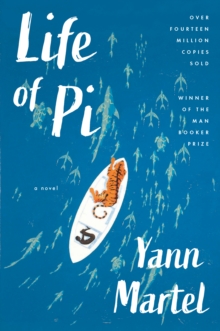 After the sinking of a cargo ship, a solitary lifeboat remains bobbing on the wild blue Pacific. The only survivors from the wreck are a sixteen-year-old boy named Pi, a hyena, a wounded zebra, an orangutanand a 450-pound Royal Bengal tiger.

Soon the tiger has dispatched all but Pi Patel, whose fear, knowledge, and cunning allow him to coexist with the tiger, Richard Parker, for 227 days while lost at sea. When they finally reach the coast of Mexico, Richard Parker flees to the jungle, never to be seen again. The Japanese authorities who interrogate Pi refuse to believe his story and press him to tell them "the truth." After hours of coercion, Pi tells a second story, a story much less fantastical, much more conventionalbut is it more true?

"A story to make you believe in the soul-sustaining power of fiction."Los Angeles Times Book Review