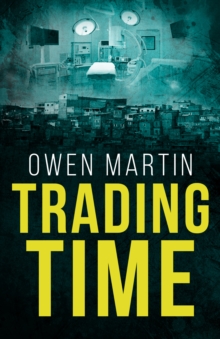 In a Brazilian favela a young couple is ageing before their very eyesIn a New York biomedical research organisation, a ground-breaking trial is allowing researchers to harvest time from individuals and redistribute to those who want moreIn a Manhattan office block a highflying lawyer finds himself grappling with a moral and ethical dilemmaSuddenly you are able to buy yourself more time.

But should you?Julia Madison is about to take a break from her career in the family corporate law firm.

A little disheartened by the excesses around her she decides to travel to Brazil to work with some of the poorest people there. Geoff Madison is on the verge of retirement, feeling his age and ready to slow down.

His long-time best friend and client, Larry is just the opposite.

Full of life and energy he is excited by the massive breakthrough his research company has made into harvesting time from one human, to give to another.

He wants Geoff to represent him in this, the biggest opportunity of his life. Geoff isn't sure, but Larry ploughs on anyway, beginning trials with this new method. Gabriel and Isabella live in a favela and willingly give up some of their years for the money they are offered.

But the drugs haven't been checked rigorously enough and they are ageing early - and quickly.

By chance, Julia meets Gabriel and hears his shocking story.

As Gabriel and Isabella's bodies race towards their untimely demise, Julia vows to bring their case to trial back in New York, placing her father's friendship with Larry at risk and causing Geoff to think carefully about right and wrong as he faces his own terminal diagnosis. A twisting and twisted drama that spans the favelas of Brazil to the courtrooms of NYC.