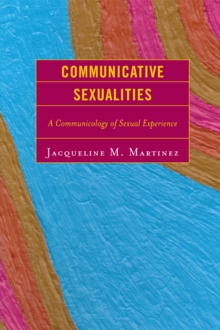 Martinez, provides an argument for and illustration of how to pursue the direct study of students' lived-experiences of sexuality in a classroom or academic setting.

It illustrates how communicology, and its methodological practice of semiotic phenomenology, allows for a sustained and rigorous study of the meaningfulness of sexual experience as it becomes manifest in the immediate, concrete, and embodied realities in the lives of those taking up such a study.

The generous use of extended examples from actual classroom experience allows for a detailed consideration of the applied research methodology, as well as the ethical issues involved in making students' lived-experience of sexuality the main subject matter of the course.

A major concern of Communicative Sexualities is to make explicit the many presuppositions about sex, gender, and sexuality that students and professors bring into the classroom.

Martinez's text features detailed discussions of how to study lived-experience sexuality as the subject matter of research.

It considers the steps necessary in suspending presuppositions regarding sexuality and gender, and focuses particular attention on the many presuppositions associated with the heterosexual-homosexual binary.

Sexuality is understood as inherently good, yet also capable of becoming a means of perpetuating human isolation and degradation as much as an experience of tremendously shared human intimacy and mutual recognition.

Discussions of historical context, the fact of temporality, and the intersection of person and culture provide a basis for explicit discussions of semiotics and phenomenology in communicology.

As an introductory text, Communicative Sexualities: Queer and Feminist Theories in Practice, by Jacqueline M.

Martinez, is an excellent primer for the advanced study of communicology and semiotic phenomenology.

It one of very few texts that provides both a theoretical or philosophical discussion of phenomenology with the study of sexuality and gender as an explicit subject matter.