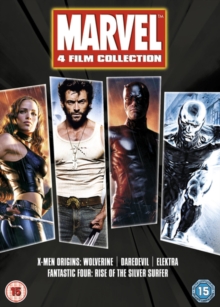 The film, set over the years leading up to the events of the 2003 'X-Men' movie, follows the young Logan from the first awakenings of his mutant powers in childhood up to his amnesiac rebirth as Wolverine, and recounts his tumultuous relationship with his ferocious half-brother, Victor Creed, aka Sabretooth (Liev Schreiber), and the events that lead him to sign up to the ominous Weapon X programme.

In 'Daredevil' (2003), Ben Affleck stars as Matt Murdock who, after being blinded by a spillage of toxic waste when he was a boy, develops his other senses to an incredible degree, allowing him to navigate the city with pinpoint accuracy.

Now he works by day as a lawyer, and by night he becomes the Daredevil when he uses his supersenses to continue his fight against underworld supervillain Kingpin (Michael Clarke Duncan).

When she is given an assignment to kill Mark Miller (Goran Visnjic) and his daughter, Abby (Kristin Prout), her conscience gets the better of her and she decides to protect them instead, provoking the wrath of martial arts syndicate 'The Hand'.

Finally, in 'Fantastic 4: Rise of the Silver Surfer' (2007), the sequel to the 2005 adaptation of the comic book, Sue Storm, aka The Invisible Girl (Jessica Alba), and Reed Richards, aka Mr. Fantastic (Ioan Gruffudd), prepare for their upcoming, superhero-studded wedding celebration.

But Reed is preoccupied by reports of a bizarre, comet-like object hurtling toward the Earth with tremendous force.

When the object hits the island of Manhattan, destroying much of the city in its wake, its identity becomes resoundingly clear: 'it' is actually a psychotic villain known as The Silver Surfer (voice of Laurence Fishburne) who aims to destroy the Earth.

Sue and Reed decide to summon Ben Grimm, aka The Thing (Michael Chiklis), and Johnny Storm, aka The Human Torch (Chris Evans), to take on the Surfer - and end up battling not only him, but an obnoxious army general (Andre Braugher) and the cantankerous Victor Von Doom (Julian MacMahon), who has broken out of the icy prison that held him captive at the end of the first movie.